Beginning in 2000 as a general beer forum, RateBeer developed into one of the largest beer rating websites in the world, with a listing of more than 470,000 different beers in its database as of early 2013.  Similar to other beer rating websites, RateBeer maintains an ongoing list of its top rated beers, 50 to be exact.

As with our previous analyses of BeerAdvocate and Untappd, we reviewed RateBeer’s Top 50 beers in an attempt to identify any trends regarding brands, beer styles, alcohol content, breweries etc.

For fun, we created a sortable list of RateBeer’s Top 50 Beers which can be arranged by brewery, country/state, ABV, etc.  This is the same list that we used to generate most of the results below.

And now, on with the show.

Interestingly, Toppling Goliath’s Kentucky Brunch Brand Stout is the top rated beer on both RateBeer and BeerAdvocate, and Mornin’ Delight from the same brewery also appears in the top 10 on both lists.  The three other beers appearing on both the top 10 from RateBeer and Beer Advocate were Russian River’s Pliny the Younger, Three Floyds’ Dark Lord Russian Imperial Stout – Bourbon Barrel Aged and Cigar City’s Hunahpu’s Imperial Stout – Double Barrel Aged.

The only beer that RateBeer and Untappd’s share in the top 10 was Double Barrel Hunahpu’s from Cigar City.

2. The Most Popular Beer Style Listed on RateBeer’s Top 50

Of the more than the 100 different beer styles in the world, only 9 appeared in RateBeer’s list of its Top 50 beers.   Of those 9 beer styles, it was Imperial Stout that stood out by far with 26 examples of this dark and boozy beer in the Top 50.  Examples of Imperial Stout dwarfed the next most popular beer style, Double IPA, by almost 400%, making it a statistically significant outlier as represented by the green data point below. 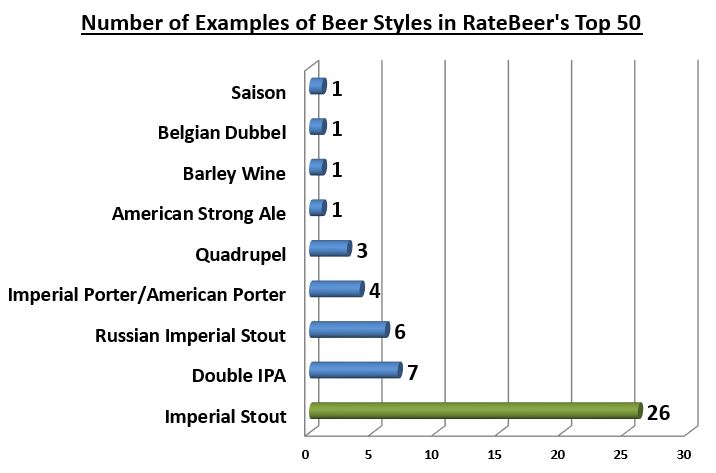 Clearly, Imperial Stouts dominate RateBeer’s Top 50, comprising more than half of the beers on the list, which was nearly identical to the percentage of Imperial Stouts on Untappt’s Top 50 (52% vs 54%, respectively). 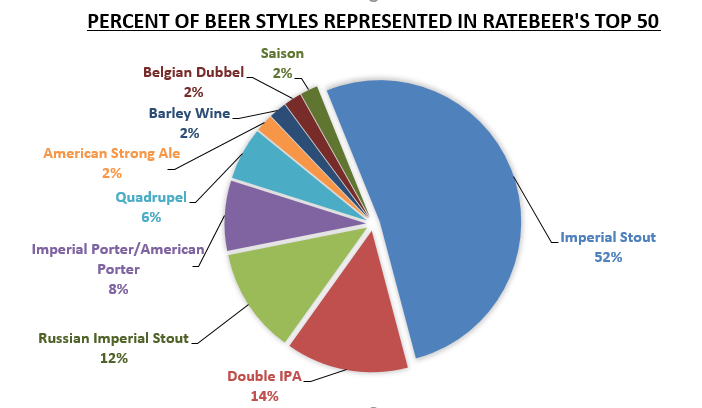 The majority of beers in RateBeer’s Top 50 had an alcohol content of greater than 9%, as can be seen in the chart below. 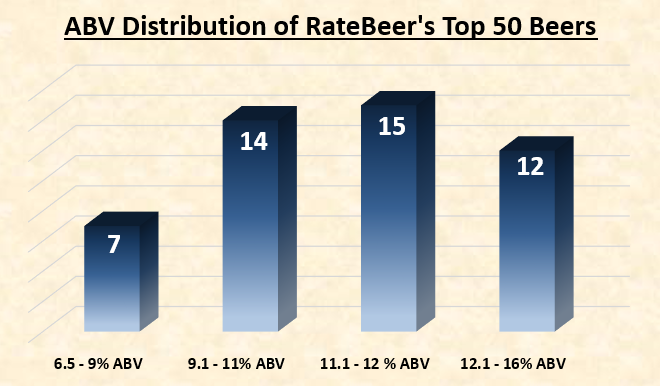 The beer with the lowest ABV on RateBeer’s Top 50 was “Ann” from Hill Farmstead Brewery weighing in at 6.5%, while the most potent beer on the list was “Buba Extreme Jack Daniels BA” (16%) from the Polish brewery Browar Szałpiw.

These figures exclude the unlisted ABVs of “Trademark Dispute (Green),” an Imperial Stout from Cycle Brewing, and “Aaron,” a Barley Wine from Hill Farmstead.  But seeing as how these beers were on the boozier end of the ABV spectrum, the average ABV of the Top 50 is not likely to be affected much.

4. Analysis of the States/Countries of  RateBeer’s Top 50

Similar to both BeerAdvocate and Untappd, the majority (82%) of beers in RateBeer’s Top 50 were from American breweries.  As shown in the chart below, only 9 beers in the Top 50 came from non-American breweries; Poland had 1, Sweden 2, and both Denmark and Belgium had 3 each.

The average number of beers per state/country listed above is 3.33, and the only state with a statistically significant number of beers in the Top 50 was California with 8, which is considered a statistical outlier.  In three impressive cases, all the beers from a given state came from just one brewery, including Toppling Goliath in Iowa, 3 Floyd’s in Indiana, and Bell’s in Michigan.

When identifying outliers like California, we try to look for explanations as to why it is performing at a statistically significant level than other states or countries.  One possible explanation for this is the number of breweries in California compared to other states/countries. 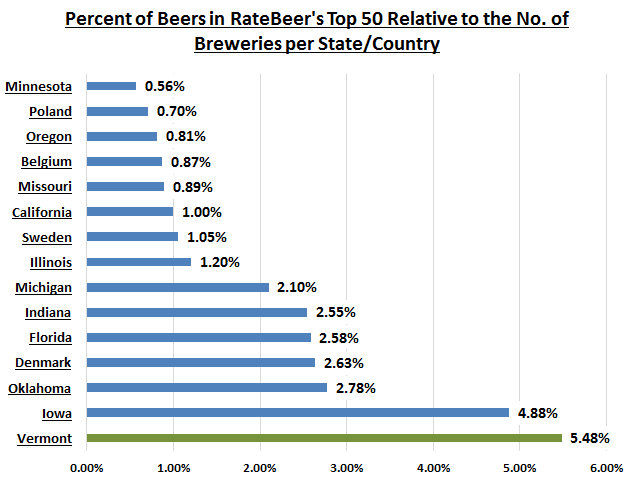 As shown in the chart above, no longer is California leading in relative terms, but rather Vermont is with 4 from a total of 84 breweries, or 5.48%.  Interestingly, 3 out of 4 of the beers from Vermont appearing in the Top 50 were from Hill Farmstead, namely Aaron, Abner, and Ann.  In other words, a large part of the reason why Vermont is performing at a statistically significant level is due to Hill Farmstead’s individual level of success.

Below is a chart of the number of beers per brewery appearing in RateBeer’s Top 50. 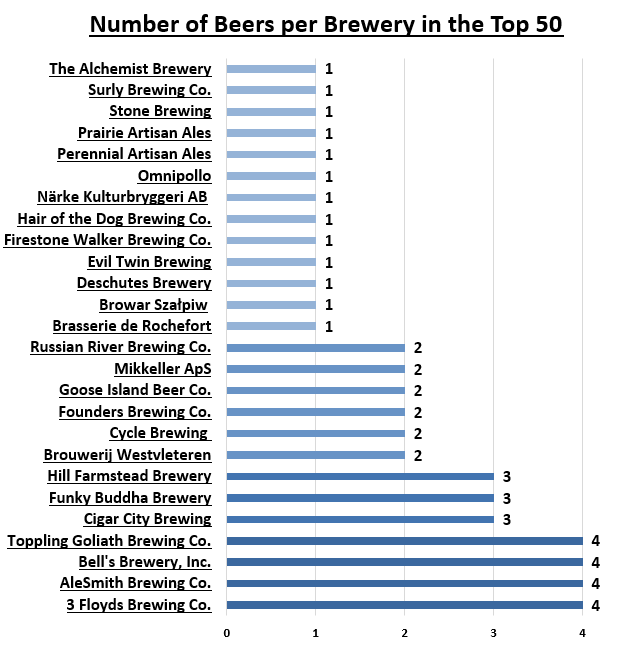 However, some breweries produce a greater variety of beers than others, which might create a greater potential for breweries that brew a larger variety of beer to have more beers in the Top 50 than others.  So let’s take a look at what happens when we consider the relative percentage of beers contributed by a particular brewery based on the number of beers that brewery produces. 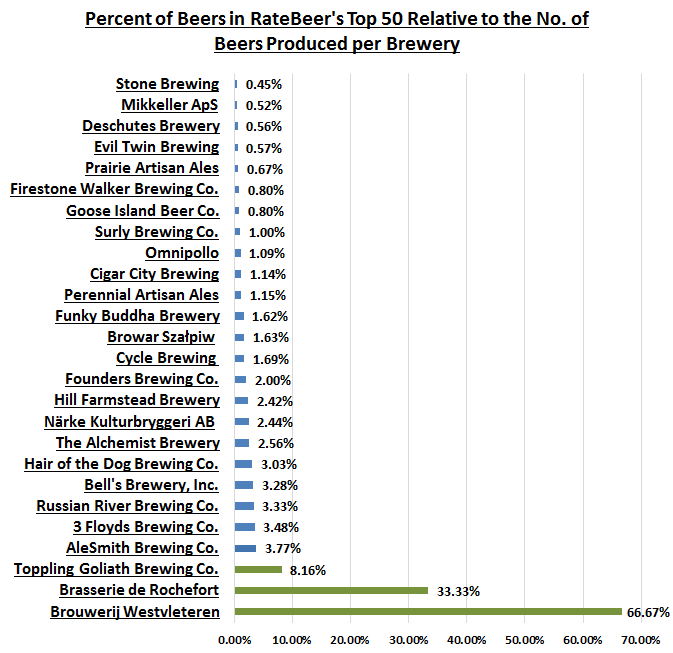 As shown in green above, there were three breweries with a statistically significant percentage of beers in the Top 50 relative to the total number of beers they produce.  These outlier breweries were Toppling Goliath (8.16%), Rochefort (33.33%) and Westvleteren (66.67%).  The Belgian breweries of Rochefort and Westvleteren are special cases in that they produce only three beers each which they’ve perfected over hundreds of years, whereas Toppling Goliath is a relatively new American brewery (2009) that produces 49 different beers, one of which sits in first place on both BeerAdvocate and RateBeer’s top 50.

Not only is one of Toppling Goliath’s beers the highest rated on both RateBeer and BeerAdvocate’s lists (selling for upwards of $1,000 per bottle on the secondary market), but Toppling Goliath is the only brewery that was consistently determined to be contributing a statistically significant number of beers to the Top 50 relative to the number of beers it produces on BeerAdvocate, Untappd and RateBeer.

In other words, a statistical analysis of three separate beer rating sources with more than 10 million reviews combined have shown that Toppling Goliath is living up to its name in a pretty serious way.

But this wasn’t the only data-driven revelation we discovered after chugging all the numbers.  In the final episode of Data Chug, we put it all together and deliver to you:

The Best Beers and Breweries of 2018.

Nah, the year ain’t over yet, but we’re just gonna go ahead and let the numbers speak for themselves.

BeerSyndicate’s Top Beers and Breweries of 2018