Today, we attempt to answer exactly 16 questions based on BeerAdvocate’s Top 250 rated beers.

Intro complete, now on with the Q & A…

Q2. Talk about cream of the crop. Here’s an easy question: Which beer was # 1?

A2. That is an easy question. The highest rated beer in the Top 250 was Kentucky Brunch Brand Stout, which is a 12% ABV American Imperial Stout from Toppling Goliath Brewing Company.

In case you’re interested, here are the rest of the beers just in the Top 10 based on score:

Tied for 2nd place were:

Tied for 3rd were:

Tied for 4th were:

BeerAdvocate recently adjusted its ranking algorithm to adjust for how many reviews of a given beer there were.  Based on that update, the Top 10 list was as follows:

Q3. Huh, seems like big boozy stouts and Double IPAs dominate the Top 10. Can’t say I’m surprised. Speaking of which, what are the most popular beer styles in the Top 250? 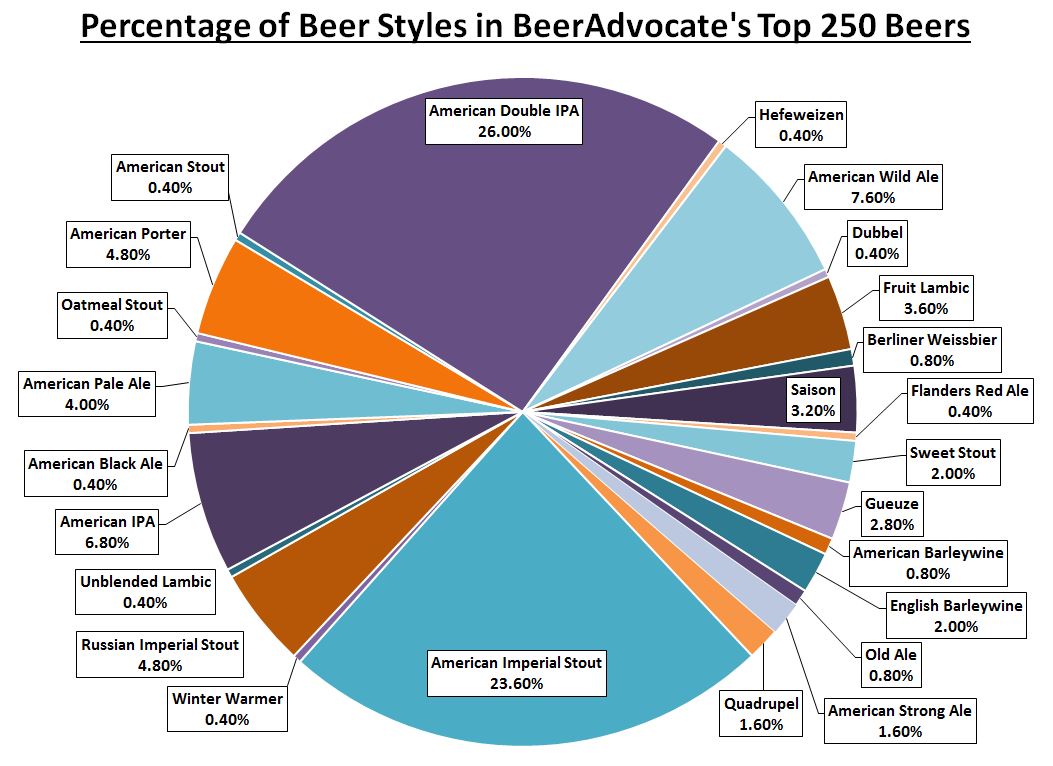 In a six-way tie for the least represented beer style in the Top 250 with only one example from each category, you have Flanders Red Ale, Belgian Dubbel, German Hefeweizen, American Stout, Winter Warmer and Unblended Lambic.

Q4. Got it. So if you want to be in the Top 250, then it helps if you’re brewing big boozy stouts and Double IPAs. Sounds like a plan. Speaking of beer styles, I’m curious, how many beer styles are there in total?

A4. Well, BeerAdvocate lists a total of 104 different beer styles, and of those 104, only 25 were represented in the Top 250, which were largely dominated by… you got it… Double IPAs and Imperials stouts. There are definitely more beer styles out there than those that appear on BeerAdvocate’s list, but as the greatest comedian of all time, Larry the Cable Guy, once said: it is what it is.

Q5. Obviously Kathy Griffin is the greatest comedian of all time, but back to beer. It seems like the most popular beer styles (American Double IPA & American Imperial Stout) just so happen to be a bit on the boozy side. Do you have any data that shows how alcoholic the beers in the Top 250 are?

A5. Fancy that you ask. We actually did take a look at the ABV distribution of the Top 250 beers, and you are correct in your suspicion that they tend to be a bit alcohol-friendly as you can see in the chart below: 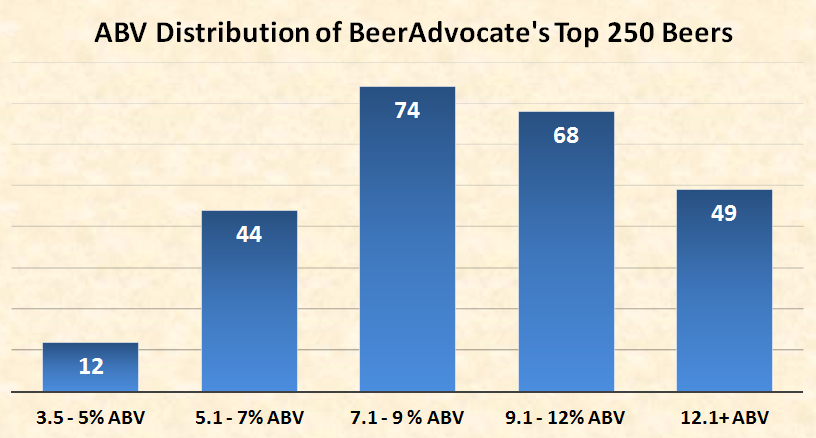 Q6. Booze sells I guess. I noticed that the top two beer styles (American Double IPA & American Imperial Stout) are, as their names suggest, American styles of beer. Can you tell me how many beers in the Top 250 are from American breweries?

A6. Another good question. Of course, brewing a certain beer style isn’t country-specific, meaning that basically any country can brew any beer style it wants— Well, with the questionable exceptions of the quasi-protected appellations of Old Gueuze and Kölsch which allegedly can only be brewed in Belgium and Cologne respectively, but who’s counting.

Anyways, the point was that just because the top two beer styles happen to be American styles, doesn’t necessarily mean they came from American breweries. But that fact had minimal impact in this case. Only 5 out of the 124 American Double IPAs and Imperial Stouts in the Top 250 were brewed by non-American breweries (2 from Canada and 3 from Denmark to be specific).

Q7. Fair point, but you didn’t exactly answer the question about how many American-brewed beers there were in the Top 250. How about you just tell me how many beers in the Top 250 came from whichever countries.

A7. We’ll do better than tell you, we’ll show you! And also tell you. As the country-coded 3-D chart below shows, 224 of the Top 250 came from the U.S. After that, Belgium came in second with 20, followed by Denmark with 3, Canada at 2, and Germany with a grand total of 1. In other words, American-brewed beers represented 89.6% of all beers in the top 250. 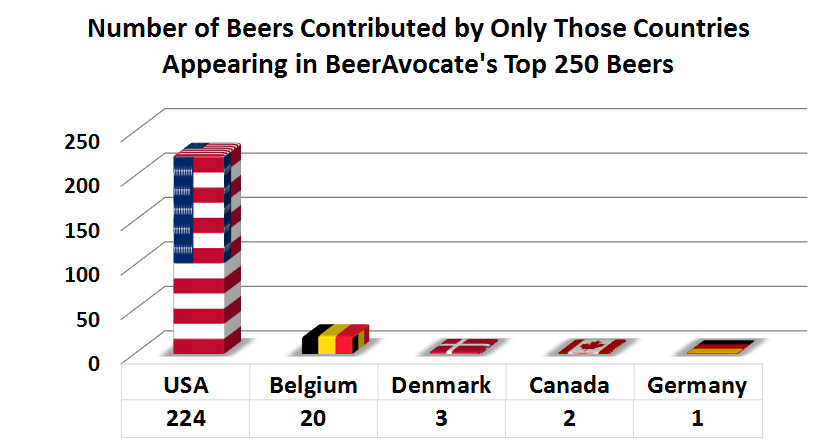 On a side note, 55.87% of all beer styles in the top 250 were American styles. So if 89.6% of beers in the top 250 came from the U.S., this seems to suggest that American breweries are beating other countries at their own game.

Q8. Geez, it looks like the U.S. is really crushing it when it comes to beer. I wonder if the number of breweries in each country has something to do with it. I mean if there are more breweries in the U.S., that might increase the chances of American-brewed beers appearing in the Top 250, right?

A8. You might be on to something. There are 6,731 breweries in the U.S., followed by Germany with 1,413, Canada at 863, Belgium with 346, and Denmark with 114.  Here’s a chart that show’s the percentage of beers contributed to the Top 250 relative to the number of breweries per country: 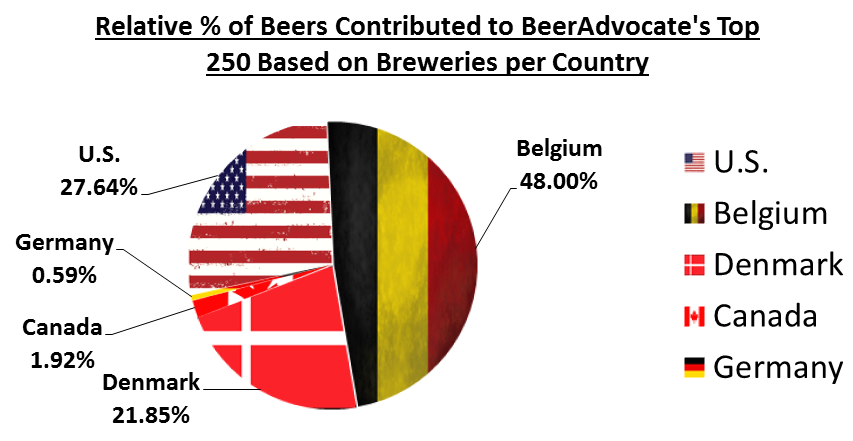 Q9. Okay, the U.S. isn’t # 1 anymore after looking at the numbers proportionate to the number of breweries there are per country. But I’m still interested to see how the individual states in the U.S. did comparatively. Got anything for me?

A9. How’s about a big fat color-coded pie chart breaking down the percentage of beers in the Top 250 from each state. And yes, we excluded non-American contributions from the chart… that’s what that little asterisk at the title of the chart is about. 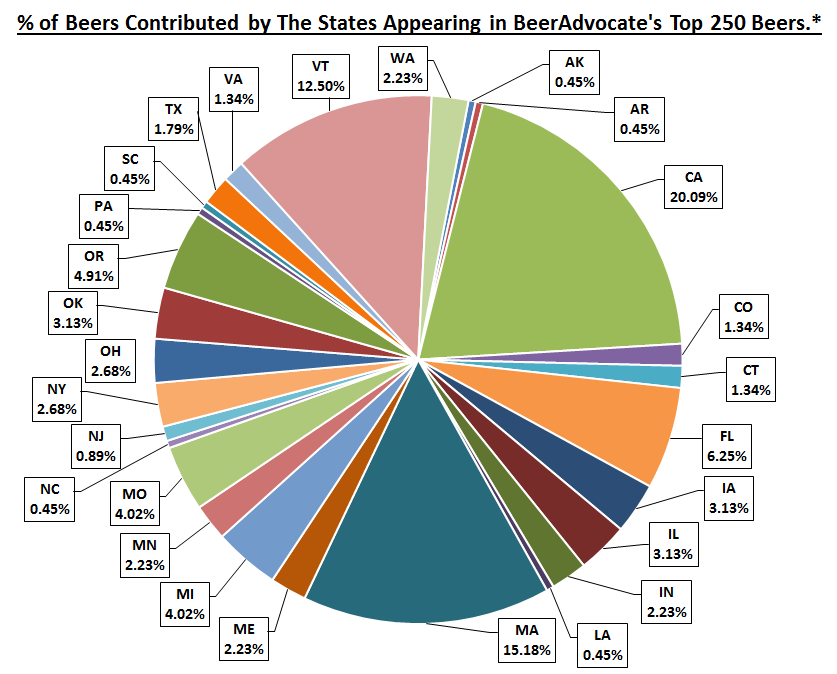 Q10. Yeah, of course there’s going to be more beers in the Top 250 from California because California has the most breweries in the U.S. So how would things look if you adjusted the numbers relative to the number of breweries per state?

A10. Below is a chart that shows the percentage of beers contributed by each state that appears in the Top 250 relative to how many breweries there are in those respective states: 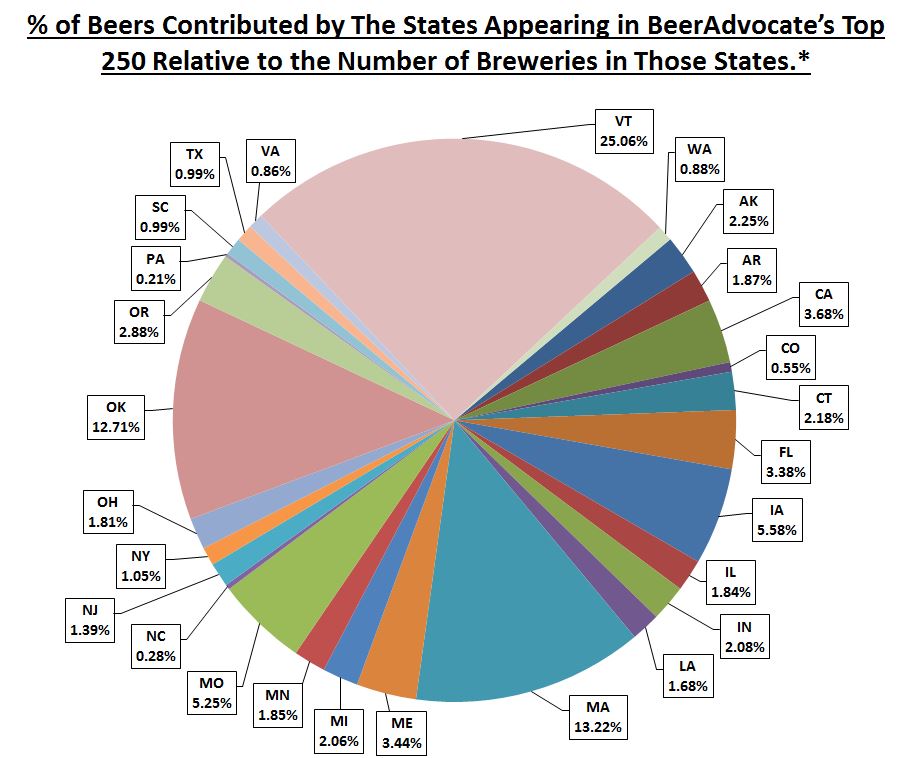 Q12. Alright, maybe I was getting a little greedy with that question. Just for fun though, how many beers were contributed by each region of the U.S., according to how the U.S. Census Bureau defines the regions, of course.

A12. Obviously we were going to use the U.S. Census Bureau method for defining regions of the U.S. That’s like the gold standard, or whatever standard the U.S. is pinning the value of its currency to nowadays. Anyways… here’s another chart. With colors. And shapes.

Here’s that same information in a non-chart format:

Q13. You know, here I am asking all these questions about the different states and beer styles, I forgot to ask about the breweries themselves. Were there many breweries with more than one beer to make it into the Top 250?

Q14. Okay, so 2.91 was the average. Were there any outlier breweries on the list? Like breweries with a statistically high number of beers in the Top 250?

A14. So this is where things are about to get a bit more interesting. To answer your question, yes, there were a few outlier breweries in the Top 250. To keep things in prospective, remember that there were 210,023 beers listed on BeerAdvocate when we ran the numbers mid-February of 2018, so for a single brewery to have multiple beers in the Top 250 is pretty impressive on its own.

But if you’re asking for extreme outliers, there were two breweries in particular that caught our eye.

Hold on to your hat because both Hill Farmstead Brewery and Trillium Brewing Company each had 20 beers in the top 250. Them’s what we call some significant outliers.

Q15. 20 beers each?!? Seems like a WTF is in order. Tell me you guys dug into those curious sounding numbers a little bit more, right?

A15. Yep. But to get that information, you’ll have to pay us money. Just kidding! As Bill Gates once said, information and all the time it takes to compile and analyze should be free! So in the spirit of the Freedom of Information Act, we’re going to share those juicy details with you free-of-charge.

But first, you see that big cliff right over there?

A16. The cliff you’ll have to hang onto until next time.

Next on Tap: Data Chug: The Outlier Breweries in BeerAdvocate’s Top 250

Data Chug: Analysis of The Most Popular Beer Styles in the World