A Craft Beer from Israel

Israel boasts about 60 breweries, one of which is The Malka Brewery located in the northern “kibbutz” of Yehiam/Yehi’am (population approx. 600), about 14 miles south of the Lebanese border.

By the way, a traditional communal “kibbutz” (literally “gathering” in Hebrew) is a kind of Zionist democratic community that functions as an equalized cooperative where no matter what kind of job a person has, goods and services are distributed to the community based on individual need.  Property, including housing, is communal to an extent as it is owned by the kibbutz, not the individual.

The first small kibbutz, Degania Alef, was established by Jewish settlers in 1909 in Palestine (modern-day Israel).  These early kibbutzim (plural of kibbutz) were agricultural collectives, but eventually other industries were added to the mix including beer.

Today, less than 3% of Israel’s population live in kibbutzim which are typically located in rural areas, but kibbutzim produce about 40% of the country’s agriculture.

So does this mean that a brewery located on a kibbutz like the Malka Brewery operates in some kind of socialist utopia?

It turns out that as of 2010, the majority of the 270 kibbutzim have given way to more capitalistic ideas and chosen to privatize (often out of necessity) , including kibbutz Yehiam where the Malka Brewery sits.

Even the very first kibbutz that started it all back in 1909 eventually privatized in 2007 which means no more assigned jobs and no more equal pay for different kinds of jobs.  Instead, members (called kibbutzniks) have to find their own jobs, live on their own income and are allowed to buy their own houses.  It also often means employers on a kibbutz can offer jobs to non-kibbutzniks, providing more flexibility and talent to the business.

Founded in 2006, the Malka (Hebrew for “queen”) Brewery is located at the base of the Yehiam Fortress, a hilltop castle built by the Crusaders in the 12th century, and features an impressive patio view of the Sea of Galilee off in the distance to the west.  The brewery first started distribution to the U.S. in 2013 and is available in at least a dozen states. 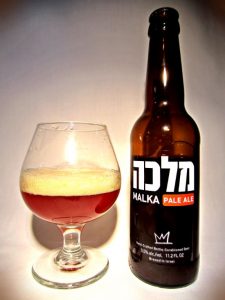 The Gist:  This is a must-try beer simply for its unique flavor-profile. Really only a Pale ale in appearance, this brew stands out for its dazzling fresh-ground coriander character, and would make for a deadly krav maga assassin in the spiced-beer category of any brewing competition. It’s one of those rare unexpected beers for those who think they’ve seen it all. Absolutely intriguing.

Description: Malka Pale Ale pours a finger of frothy light tan head of moderate persistence revealing a hazy reddish-copper body beneath.  The aroma is instantly and unmistakably fresh-ground coriander, followed up by hints of dried hibiscus flowers, honey and Spree candy.  Flavor-wise, coriander is first to the party, providing a Pop Rocks tingle with a slight tanginess in this lightly malty sweet beer.  Not far behind is an entourage of taste impressions including Apple Jacks cereal, passion fruit soda, orange-blossom water, and very slight star anise.  This pleasantly memorable brew finishes dry with notes of (you guessed it) coriander, dry stems and all.

How to say “cheers” in Hebrew: L’chaim. Pronounced “La Hime” means “to your health”.

A Craft Beer from Iceland