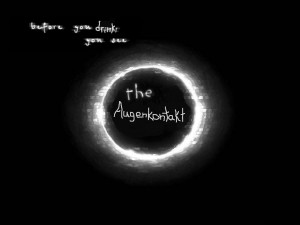 Yes, this is a beer blog, not a drinking blog.  In fact, the motto is “stop drinking beer and start tasting it”, but even I can’t deny that ‘beer’ and ‘drinking’ are at least loosely associated.  Because of that, I acknowledge that when talking about drinking customs of the world, we’re not necessarily only talking about beer (although in my mind, we are).

“Augenkontakt” (pronounced ow-gen-kon-tahkt) is a German word which translates to “eye contact”, and can sometimes be heard in the presence of German speakers right around the time when glasses are being raised for a toast.  For most English speakers though, “eye contact” isn’t exactly a term that evokes foreboding feelings of fear and trembling…  not yet at least.  But keep reading, because all of that is about to change.

By the way, have you ever heard someone say “some things you just can’t unlearn”?  They usually say that after they’ve discovered something they wish they hadn’t, sort of like that ominous moment in the 2002 psychological horror film The Ring, where right after the main character watches unsettling images on “the cursed video tape”, a phone rings and a girl’s voice is heard on the other end whispering those two disturbingly inescapable words, “seven days…”, harbingering the amount of time the main character has left before she is to meet her grisly end.

Fair Warning: For the uninitiated, you’re about to have one of those “some things you just can’t unlearn” moments.

I first encountered the “eye contact” phenomenon during my later youth spent in Berlin.  The legal drinking age in Germany for beer and wine was 16, but nobody really enforced it.  What was enforced however, regardless of age, was “eye contact”.  That is, making sure you look all of your drinking comrades in the eye during or directly after glasses are clinked, but always before you take that first sip.

It felt a bit Twilight Zone-y making eye contact with everyone and having them methodically look back at me before that first splash of beer hit the lips, but I was polite about it and racked it up to cultural differences.  That was until one evening when someone called me out, alleging that I hadn’t looked him in the eye.

That’s when I got schooled about what the big deal was.

What I was told was perhaps the most diabolically engineered, fear-inducing mythological curse of all time:

“Look everyone in the eye before drinking, or be cursed with SEVEN YEARS OF BAD SEX.”

Not even the most nihilistically stoic, borderline masochistic German in the middle of a full-blown, angst-y, existential crisis wants that nightmare of an albatross around the neck, which is why Germans are very careful to touch glasses with every person within their reach and make eye contact with them and every other person within the immediate drinking group before taking that first drink.

And this superstition isn’t unique to Germany.

No, you can find almost identical ocular drinking customs in France, Italy, the Czech Republic, Belgium, and several other countries throughout Europe, all with the same underlying fearful motivation.

So where did this anxious etiquette come from?

If I had to speculate, I’d wager that this sexed-up version of the evil eye is a modernized mutation of an older medieval drinking protocol borne out of mistrust and treachery.

The story goes that within the Viking culture during the Middle Ages, it was tradition to look your co-drinker in the eye so as to ensure that neither party was secretly withdrawing a weapon for less than friendly purposes.  During the Viking’s many “expeditions” throughout Europe and beyond, it stands to reason that those who had encounters with Vikings had an opportunity to become familiar with some of their customs.  I could easily imagine medieval Germans and other peoples advising their countrymen to make sure you look those crafty Vikings in the eye if you ever have the displeasure of sharing a drink with one, or else…

Ok, so maybe the Vikings inspired the whole negative association that comes from NOT looking someone in the eye when drinking, but where’d the seven years thing come from?

You’ve probably heard of the belief that breaking a mirror can result in a seven year sentence of bad luck— not bad sex per se, but pretty close.  This notion came from the superstitious idea that a mirror could capture part of a person’s soul, and if a person broke a mirror, then part of their soul would be broken too.  The seven year connection seems to come from the Romans, inventors of the mirror, who believed that a person’s physical body renewed itself every seven years.  So the logic is that if the soul is a part of the body and if part of the soul were damaged from a broken mirror, then it would take seven years for that part of the body to be restored, but during those seven years the victim would suffer poor health.

The idea of a seven year figure pops up in other places too, such as the seven years of famine cursed upon Egypt in Genesis 41:30, the seven year itch, seven years before a bankruptcy is wiped away from a credit report, and also from a pretty legitimate looking email I got that said if I didn’t forward that email to 5 people I know, I’d get seven years of bad luck.

Whether broken mirrors, eye contact-less toasts, or unforwarded chain letters result in bad luck is ultimately up to the scientific community to disprove if they could take a break from pointlessly hurling particles around a giant underground horse track for a few minutes.  But until such time, YOU are now liable with the knowledge that not making eye contact with your drinking buddies may land you in a world of lackluster Coitus.

And if your sex life today ain’t all it used to be, perhaps you need look no further than into your drinking partners eyes the next time you imbibe, or risk adding another seven year bid to your current sentence.

Sorry friend, I often wish I didn’t have the burden of knowing what you know now, but sometimes in life, there are just some things you can’t unlearn…